Robin Stevens, author of the wildly popular Murder Most Unladylike series, told Barnes Children’s Literature Festival how her unique childhood – moving from America aged five to live on-campus at an Oxford college with her parents – has heavily influenced her writing.

“There were no kids my age where I lived; just teachers and students,” she says. “I felt like Alice in Wonderland – I was too small for everything!”

This isolated feeling led Robin to create Hazel and Daisy, the intrepid heroes of Murder Most Unladylike. “I have two main characters, so they always have a best friend to support them.”

Robin has been writing from a very young age. As a child, she created the TCA magazine – the Toy Care Association – that she admits was just an excuse to write stories. This is despite the fact she struggled with learning to read as a child.

“My teacher pulled my Mum aside one day for a chat,” said Robin. “She said ‘I think Robin can’t learn to read… because of her accent.”

Luckily, Robin’s accent hasn’t hindered her success, as the children in the audience sat in awed silence and looked on adoringly as she spoke. You could have heard a pin drop as Robin read an extract from her upcoming book, Top Marks for Murder, Hazel and Daisy’s eighth adventure together. No doubt everyone in that audience will be lining up to get a copy when the book drops on the 8th  August. 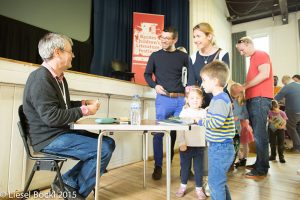 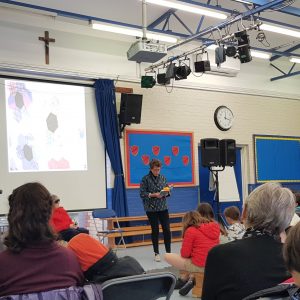 The true story behind Cloud Boy

Laughing and learning with Christopher Lloyd