Duncan Beedie's career as a children's author started with a bang, when his debut picture book, 'The Bear Who Stared' was shortlisted for the Waterstone's Children's Book Prize 2017. He's gone from strength to strength with his latest two offerings 'The Last Chip' and 'The Lumberjack's Beard', both packed with the punch of his trademark, cartoony illustration style, developed while working in animation. Come and see Duncan's artistry in action at Barnes on Sunday 13th May, where he he will be hosting an interactive story time and live drawing from 'The Last Chip', his book all about a hungry pigeon.... 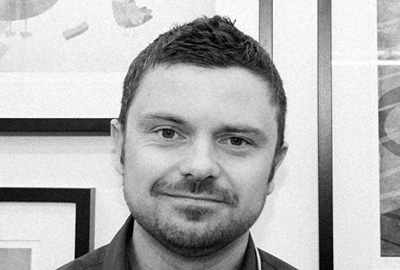 Duncan Beedie: As my dad was in the RAF, I wanted to be a fighter pilot. I got to see lots of jets roaring through the sky as a child.

BCLF: What’s the best piece of advice you’ve been given?

DB: ‘Keep your elbows in’. It works for a great many scenarios.

BCLF: And the worst?

DB: ‘Remittance’ (one my fellow freelance author/illustrators will appreciate, I’m sure.)

DB: As a kid living near air bases, I can now identify pretty much any military aircraft at a glance. Geeky, I know!

BCLF: Favourite book as a child?

DB: Any of the Major Tom & Oddball series by Peter Longden. My 1985 Banana-Man annual was very precious to me as well.

DB: I wouldn’t say ‘favourite’ due to the inexplicable level of evil they represent, but the Trio from Cormac McCarthy’s ‘Outer Dark’ are the characters whose villainy has scared (and scarred) me the most.

BCLF: Tell us a joke…

DB: It’s a puerile one, but it might just pass the decency threshold! Here goes….

Why did the baker have brown hands?

Because he kneaded  a poo.

5 things we found out about author of Once, Morris Gleitzman