Cressida Cowell on Inspiration and Imagination

Cressida Cowell, author of multimillion book series ‘How to Train your Dragon’, speaks about the importance of stories and the inspiration behind her own work.

The talk was introduced by 11-year-old Henry, a passionate fan of Cressida’s series. Honoured, Cressida took the stage and told the crowd; “Writers were my heroes growing-up, a kid came up to me at the start and said you’re my hero.” Clearly touched she told all the children in the room they too could be writers when they grow up.

Encouraging creativity in kids was a focus of Cressida’s talk. We were taken on a journey back to her childhood, where she spent summers on a remote island off Scotland. There was no electricity, but heaps of time for her to run wild over the hills and to let creativity flow. Cressida was always writing and drawing in her spare time.

Cressida’s dragon series explores the phrase ‘creative solution’ very frequently. Her dragons are always getting themselves into situations, that require creative thinking to solve. Likewise, children are creative, she says: “Children are the cleverest people in the world because they don’t know the rules yet. We need creative politicians”.

Cressida also had advice for the parents and teachers in the audience. Cressida told the children to tell the adults: “They must read to you way beyond the age you can read”. She also talked about her campaign called ‘Free Writing Friday’, where children get the chance to create stories with no comments from teachers. Throughout her talk, she emphasised the importance of stories. “We mustn’t lose books,” she stressed. 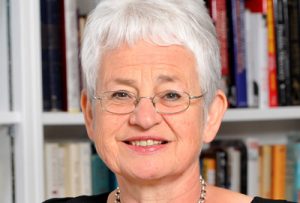 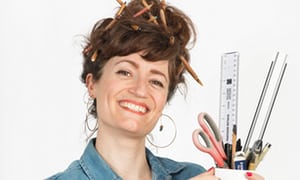 The Not So Feeble Tor Freeman