Once tickets are added to your basket they are reserved for 20 minutes only.

In conversation with Nick Ostler and Mark Huckerby

Mark Huckerby and Nick Ostler are the Emmy-winning and Bafta-nominated writing partnership behind most of your kids favourite TV shows – Peter Rabbit, Danger Mouse and Shaun The Sheep, to name but a few. Excitingly, they are also currently scripting a new TV show of some of our all time favourite kids lit characters, The Moomins. We can hardly wait! Not happy with conquering the world of TV, this eye-wateringly busy writing duo are a force to be reckoned with in the world of kids books too. If your kids haven't tried their fantastic adventure series, 'Defender of the Realm', we highly recommend it. 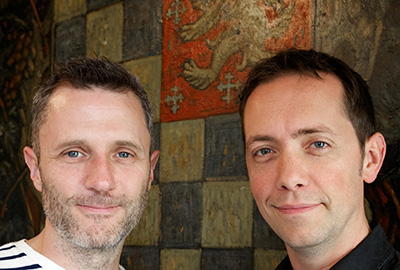 Nick Ostler: Apparently my parents thought I should be a bank manager,
because I liked counting my pocket money! But once I had a say in it I
thought I’d prefer to be the next Gerald Durrell or David Attenborough
– but although I’ve kept my interest in the Natural World I was never
good enough at science to do it for a living, sadly.

Mark Huckerby: An actor. It was the only thing I thought I was remotely good
at. I went as far as looking at drama schools but ended up diverting
to the University of Nottingham where I mostly messed around acting
even though it wasn’t my degree.

BCLF: What would you be doing if you weren’t an amazing author/illustrator?

Nick: Just before we decided to give scriptwriting full time a go, I
was applying for Journalism courses (my degree was Politics) and I
think I would have enjoyed that too – it would certainly be an
interesting job to be doing right now!

Mark: Failing as an actor.

Nick: I could say the wonder of creating stories from my head every
day, but I think I’ll go with a five minute commute with a view of the
South Downs and no boss.

Mark: Getting paid to day dream. I mean, there’s more to writing than
that of course but in a nutshell, that’s what I’m doing. The idea that
my ideas and thoughts have an actual value blows my tiny mind.

Nick: I have a new one – The Gorm in Kieran Larwood’s brilliant ‘Podkin’
series – creepy, dark, they really get under your skin – perfect kids’
fantasy villains.

Mark: Mr Victor Hazell from ‘Danny the Champion of the World’ was the
first villain I recall. I distintctly remember being aged eight,
sitting cross-legged in front of my teacher as she read the book and
feeling really angry about him.

Nick: I’d ask Douglas Adams if he hid any unknown manuscripts anywhere
as I’d love to read them.

Mark: Not a question, but I sincerely wish I could have said a
heartfelt thank you to Sheila K McCullagh for helping me learn to
read. I was a (very) late starter but her Tim and the Hidden People
reading scheme not only taught me to read but instilled in me a
life-long love of the fantasy genre and ghost stories.

Nick: For entertainment value, May Evans (‘Who Let The Gods Out?’), for
inspiration and to make us all better writers, Phillip Pullman and
because I haven’t met him yet and would love to tell him how much I
love his books Kieran Larwood. Maybe they’re coming already, I
don’t know!

Nick: Have finally got to ‘Book of Dust’ by Philip Pullman – great so far! 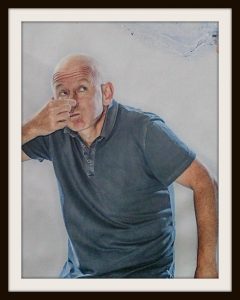 The World of Norm… and Tractors by Jonathan Meres

PSST! If you're a new, aspiring or #independent author with an amazing idea for an event you could be part of our F… https://t.co/OmDJkOfW2K
6 days ago
Hooray! It's #halfterm! The kids won't want to miss #SkyinthePie featuring poetry from our mate @McgoughRoger and l… https://t.co/nstDNrs1bZ
1 week ago
"How do you spell love?" asked Piglet "You don't spell it, you feel it," said Pooh #ValentinesDay https://t.co/cRIC2t32W6
1 week ago
@kidslitfest KLAXON! Calling all new #independent or aspiring authors! Here's your chance to be part of London's… https://t.co/DQuJuhqfYN
2 weeks ago
Folks don't forget it's #NationalStorytellingWeek! Make some time today to read with your child at bedtime. Even 10… https://t.co/5xXwrlayYV
2 weeks ago
On #HarryPotterBookNight @kidslitfest we're with #Hermione: 'When in doubt, go to the library' @KidsBloomsbury https://t.co/ErhtKE3YJT
2 weeks ago

Any cookies that may not be particularly necessary for the website to function and is used specifically to collect user personal data via analytics, ads, other embedded contents are termed as non-necessary cookies. It is mandatory to procure user consent prior to running these cookies on your website.